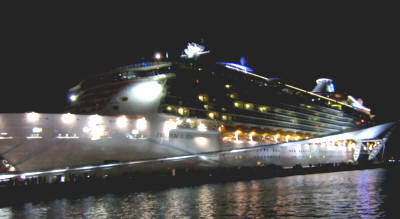 It was hard to believe it was already our third trip on the Fantastic Voyage. It is beginning to feel like some sort of annual family reunion. We saw many familiar faces of those we had met in the past years. We were looking forward to our week long "party with a purpose".

We sailed on the largest cruise ship in the world - Royal Caribbean's Freedom Of The Seas. This ship has unique features such as a wave machine for surfing/boogey boarding and a boxing ring. The layout of the boat is similar to the previous Royal Caribbean ships on which we've sailed; therefore, we had very few problems finding our way around this massive vessel.

The size of the Freedom Of The Seas added to the inherent problem that has plagued the cruise in the past - the lines. This ship can accommodate nearly 4000 passengers; however, the venues are the same size as the smaller ships. Therefore, Traci and I had to plan our concert schedules strategically to minimize our wait time and to increase our chances of getting in. Tom Joyner and his organizers did a good job at addressing this problem by having most of the artists perform more than once during the week and by simulcasting the main stage concerts on a large monitor above the Promenade Deck. Each evening, there were performances happening all over the ship. We managed to see all the concerts we wanted to see with the exception of two - Tito Jackson and Chuck Brown. We heard from other passengers that both shows were very good. There was just no way Traci and me to see every concert happening on the ship that week.

Tom Joyner and his staff have a formula for success that includes loads of excellent concerts, seminars, games, contests, theme nights, and fitness classes instructed by the experts. Other than the performers, the port of calls, and a minor theme night change, the week long cruise was virtually the same as it was in 2005 and 2006. Therefore, I will give my highlights for this 2007 trip report.

I liked the concerts more this year than in the previous years. I initially had a hard time choosing a favorite because each night they seemed to get better. However, by mid-week, there was no doubt my favorite performance was New Edition. It was my first time seeing them live. I was impressed at how tight their choreography was for every song they sang. There were several performances that were a close second in my ranking and these were: The O'Jay's, BBD (Bell, Biv, Devoe), Mint Condition, Comedian Ricky Smiley (during the gospel concert), the New Jack Swing concert (Keith Sweat, Silk, Teddy Riley), and Charlie Wilson.

Because of their schedules, Patti Labelle and LL Cool J could only do one performance during the week. Since there is no venue on the ship that will hold all 4000 passengers, a Plan B had to be implemented. To remedy the situation, Tom Joyner and crew rented The Coliseum in downtown San Juan, Puerto Rico and had a brigade of shuttle buses waiting at the pier to shuttle all 4000 of us to the concert. The whole operation went smoothly. I applaud the organizers for a great job.

I thought the pairing of Patti Labelle and LL Cool J was rather odd. Given most of the passengers are middle-aged or older, Patti was definitely the major draw. A much smaller subset were there to see LL. Patti performed first and did a nice job (although I thought the sound crew had her microphone set too loud), but when it was LL Cool J's turn, there was a mass exodus back to the shuttle buses. Traci and I stayed for LL's entire 45-minute set. It brought back memories but I have a hard time getting enjoyment out of a rap concert. I much prefer watching a live band.

Traci and I attended a rather bizarre show back on the ship later that evening. It was called Hypno Bro. This comedian/hypnotist brings people on the stage and hypnotizes them. Whether or not these people were part of the act or truly volunteers was of little importance. The real fun is watching the people comply with the hypnotist's orders. He had them do things such as fall asleep, pretend to be a musician, and react to an imaginary thumb tack in their seats every time he said a keyword. It was quite funny. I ran into several passengers later that week who had a hard time controlling their laughter when they asked, "Did you see Hypno Bro?"

The ports of call did not pan out as nice as I would have liked. Instead of the normal four stops, there were only three: San Juan, Puerto Rico; Casa de Campo, Dominican Republic; and Coco Cay, Bahamas (private Royal Caribbean island). We had hoped to do a little sightseeing in San Juan before getting on the shuttle buses for the Patti Labelle/LL Cool J concert. Unfortunately, this didn't happen since we were delayed for two hours from exiting the ship while the authorities arrested three passengers for child support. Apparently, their names were flagged when their passports were scanned in Miami. I found this out the next day while attending a men-only marriage seminar hosted by Judge Mablean (former judge on the TV show Divorce Court). 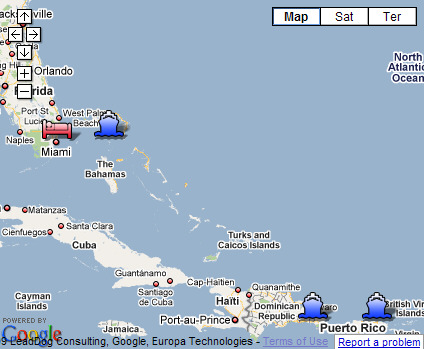 Traci and I signed up for the Santo Domingo tour in the Dominican Republic. We had a 2-hour ride on a tour bus from the port in Casa de Campo to the capital city, Santo Domingo. Upon arrival, our guide led us on a 2-hour walking tour of Zona Colonial (Colonial Zone).

Zona Colonial is full of historical homes, monuments, chapels, and cathedrals – some dating back to the 1500’s when the Spanish occupied the island. Our first stop was the former palace of Diego Columbus (son of Christopher Columbus). It is now a museum called Alcazar de Colon. We were led on a 20-minute tour through the small doorways and dark rooms of the residence where we saw the furniture, weapons, manuscripts, and paintings representative of Columbus’ day. One of the more memorable parts of our visit was the room where portraits of the Spanish royalty Queen Isabella and her husband King Ferdinand are displayed. Our guide told us about the queen’s infidelity that angered the king. We were told that to this day the king keeps an eye on anyone entering the room. Sure enough, regardless of which angle we viewed Ferdinand’s portrait, he appeared to be staring at us with suspicious eyes. Creepy!

From the museum we were led down Calle de Las Damas (oldest street in the western hemisphere) to the Panteón Nacional (National Pantheon). The walls of this eighteenth century sanctuary contain the tombs of national heroes. A uniformed soldier stands motionless at the entrance. Inside burns the Eternal Flame. Our guide had begun to tell us about the people who are entombed in the building when we were distracted by another soldier facing the one at the entrance. Thinking we were going to witness a changing of the guard, we rushed to the entrance with camera in hand only to find out the original soldier was being relieved for 5 minutes before his next 2-hour shift.

Our final stop before a visit to a souvenir shop was the Cathedral of Santa Maria La Menor. This is the oldest cathedral in the western hemisphere. Its construction had been started and stopped for 28 years since 1512. Because of this, you can see several different architectural styles employed such as baroque and gothic. Women wearing pants or skirts that do not cover their knees are not allowed to enter the sanctuary. However, there are long wraps available at the entrance for those who are not dressed appropriately. 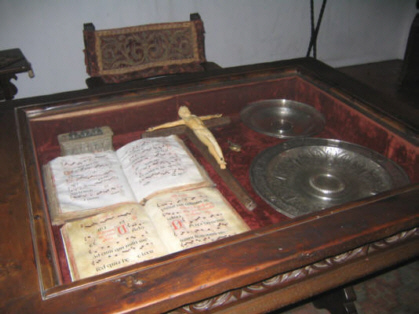 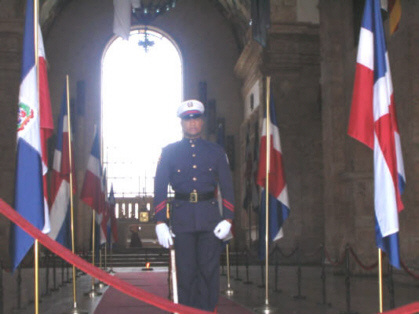 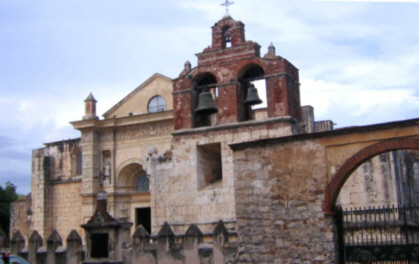 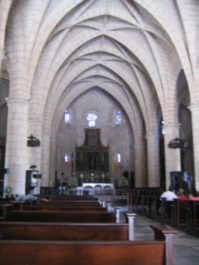 A sad aspect of the walking tour of Zona Colonial was the constant tugs we got from the persistent street children begging for money or offering shoe shines. Poverty is reality for many in Santo Domingo.

Finally, while I recommend a visit to Zona Colonial, I can only marginally recommend doing the Royal Caribbean version of the tour because of the long transfer times. At least a day is needed to take in all of the diverse history in this section of Santo Domingo. In fact, Zona Colonial is on the UNESCO World Heritage Site list.

Upon arriving back at the ship, we heard that other tours did not work out so well. Other passengers that took Royal Caribbean's advice and paid $5 for a shuttle to a Dominican marketplace were disappointed to find there was not much there.

Finally, the annual beach party was held at Coco Cay, Bahamas on the final full day of the cruise. Not wanting to miss a meal, Traci and I arrived late and missed most of the games and contests - including the annual water gun battle. Instead, we relaxed in a hammock for an hour while we waited for the long line to the tender boat back to the ship to die down.

The theme nights were the same as the previous years except for Toga Night which was replaced with Sexy Night. Tom explained this change was necessary because on past cruises, people were cutting up the Royal Caribbean bed sheets to make toga costumes. Due to the nighttime Patti Labelle/LL Cool J concert in San Juan, I don't think many people changed into their sexy outfits when they returned to the ship.

White Night normally coincides with Frankie Beverly's performance but this year Frankie wore red. Shame on him:). Pajama Night occurred on the final night of the cruise. The last night of the cruise is also referred to as "Might As Well Night". It's a call to all the singles on the cruise to get up the nerve to approach that someone they've had their eye on all week.

One of the cool things about this cruise is that once the performers come off stage, they are regular passengers having a good time like the rest of us. There are some celebrities such as Emmanuel Lewis and Dr. Bobby Jones who return year after year regardless of whether or not they are performing. Traci and I had numerous celebrity sightings this year. The ones we met were very down-to-earth.

All passengers are given the opportunity to sign up for next year's cruise before leaving the ship. Although Traci and I said we'd probably take a break from the cruise next year, we signed up anyway so that we could get our favorite room overlooking the Promenade Deck if we decide to do the cruise again in 2008. Fortunately, no one will contact you about putting down a deposit for several months. Therefore, we have time to make a decision. However, we would like to go in 2009 since it will be the 10th Anniversary of the Fantastic Voyage. I'm sure that cruise will be the ultimate "Party With A Purpose".