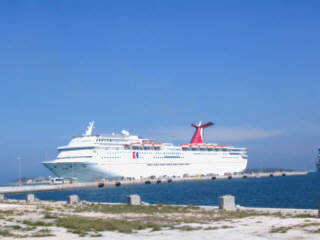 Traci and I experienced our first One Love Gospel Cruise. This 4-day voyage on the Carnival Imagination cruise ship left from Miami and made stops in Key West and Mexico before returning. Along the way, we were entertained by award-winning gospel artists such as Kirk Franklin and Martha Munizzi. In addition to the ship's regularly schedule fun activities, there were also some entertaining Christian-oriented activities offered to the One Love guests. This cruise was an enjoyable winter getaway.

The One Love Gospel Cruise was hosted by Radio One. This was their second annual cruise. Traci and I had heard about it on the radio the previous year and decided to send in our deposit in July 2005. I wasn't as excited about the cruise as Traci was. I thought I was going to have to deal with being preached at for four days. Fortunately, this was not the case. Another concern we had was that we had just come off our first Tom Joyner Fantastic Voyage cruise which was the best cruise we had ever been on in our lives. How was the gospel cruise going to compare with that?

We decided to open our minds to the new experience of cruising with our fellow Christians and not worry about comparing the cruise to other cruises we had done. With a starting price of $600 per person (airfare not included) and access to One Love Gospel activities/concert as well as access to all the Carnival cruise activities and food, this 4-day winter getaway was a sweet deal. We had a nice time with our fellow cruisers who were fun-loving, down-to-earth people. I'm glad we went.

We sailed on the Carnival Imagination cruise ship. Of the 2200 passengers aboard the ship, a little over 600 of us were there for the One Love Gospel Cruise. After we were onboard, Traci and I had to make our way to the Xanadu Lounge where we picked up our gift bags and most importantly, our wristbands which served as our ticket to attend the gospel events. The gift bag consisted of gifts from the sponsors (AARP, Glory Foods, Moonlight Cruises, Radio One, 20th Century Fox, and Gospel Truth Magazine). These gifts included T-shirts, picture frames, DVDs ("iRobot" and "Roll Bounce"), a tambourine, a travel bag, luggage tags, and other trinkets.

The gospel events had to be scheduled so as not to interfere with the other ship activities. Most of the gospel events took place in either the Xanadu Lounge or the Dynasty Lounge and rarely lasted more than 2 hours. During these times a "Private Party" sign was posted outside the lounge and we had to show our One Love wristbands for admittance.

Our first One Love event was the 1-hour Meet & Greet where we were introduced to the top brass at Radio One, including the founder and chairman, Cathy Hughes. A number of program directors and radio personalities from all over the country were also introduced. This meeting was attended by One Love guests as well as some of the gospel artists who would be performing during the cruise. Traci was much better at recognizing these artists than I was.

After all the formal introductions, the hostess ran through the One Love itinerary we were given when we arrived at the Meet & Greet. Unfortunately, Traci and I discovered that we had made a mistake. The organizers of the gospel cruise had assigned all of us to the late seating for dinner so that there would be no conflicts with the gospel events. Traci and I had just spent our first 45 minutes on the ship standing in line to have our dinner assignment moved to the early seating as we had signed up for when we booked the cruise. This was not a big deal, however. Some days Traci and I ate dinner at the early seating and other days at the late seating. I just wish we hadn't wasted our time standing in the seat re-assignment line.

In addition to the two gospel concerts, the One Love organizers put together a nice set of activities and yet still allowed plenty of time for us to take part in some of the ship's regularly scheduled activities not associated with One Love. Two of my favorite gospel events were the Comedy Show and the "Fun in the Sun" Karaoke.

The Comedy Show featured comedians Akintunde and Shawty Shawty. The only difference from this comedy show and others I've seen is the material is rated PG with no cussing. It doesn't mean the show wasn't funny. Actually, Akintunde was the sole reason I liked this show. His entire act had us cracking up but you have got to see him do the 'riding the horse' routine. It is too funny.

On the other hand, Shawty Shawty was the headline comedian on the show. I had seen him on BET Comic View. His trademark is to yell out with a deep country accent, "What my name is?". The audience then replies, "Shawty!". Shawty Shawty was a disappointment. He apparently thought it was funny to make fun of retarded people. It wasn't funny. I hope he drops that act and gets back to the funny material he used to perform on BET.

The "Fun In The Sun" Karaoke Contest was a riot. It was modeled after Amateur Night at the Apollo. A contestant could get boo'ed off the stage. The contest was emceed by comedian Akintunde and gospel artist Canton Jones. The two of them were excellent hosts. They could probably go on the road as a comedy team. They were that good. Technically, booing a contestant was not allowed. Canton reminded us that we are all Christians; however, if someone sounded a little off, it was okay to wave your hand from side to side for "encouragement". If that didn't help he recommended a little Holy Ghost dance. If that didn't work, the Sand Lady would be sent out to take the microphone and send the contestant back to his/her seat. There were some very good singers. Then, there were some who had to be sent back to their seat by the Sand Lady. It was a lot of fun.

The prize for winning the contest was two tickets to MegaFest. It came down to a tie between a lady who sang "You're the Best Thing That Ever Happened to Me" by Gladys Knight and a lady who sang "And, I am Telling You" by Jennifer Holliday. They were getting ready to do a sing-off until the first lady conceded because she was a Radio One employee who just wanted to get noticed by the music industry people in the room. She felt she had accomplished that so she dropped out of the competition. Both ladies were outstanding performers.

There were other gospel events such as movies ("Something To Sing About" and "Woman, Thou Art Loosed"), morning Praizercise Aerobics, a dynamic featured speaker (Rev. Charles Blackshear), Praise parties, and a 1-hour Sunday morning worship service at which we heard a great sermon from Paster Karen Dones.

The Praise parties kind of missed their mark. These consisted of a DJ playing up-tempo Christian music (mainly Kirk Franklin songs) in hopes of starting a dance party. These rarely lasted longer then a 10-minute session of the Electric Slide.

Traci attended the Praizercise aerobics class the first morning on the cruise at 7 AM. There is no need to ask where I was at that time of a vacation morning - in the bed sound asleep. Anyway, she said the class was too crowded so they moved it to a lounge. The class wasn't Traci's cup of tea so she left after 15 minutes to exercise on the ship's workout equipment.

When we weren't attending the gospel events, there was plenty of time for us to take part in the ship's activities. There were trivia games, live music, contests, a casino, swimming pools, hot tubs, cash bingo, and Vegas-style shows in the evening (Excellent!). Then, of course, there is food galore and an extravagant midnight buffet. However, on this cruise, the activity Traci and I seemed to participate in most often was our afternoon nap before dinner. Sleeping to the gently rock of a cruise ship is magical. continue... 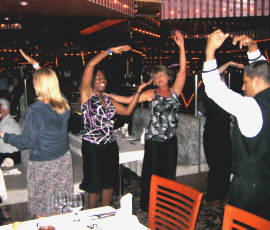 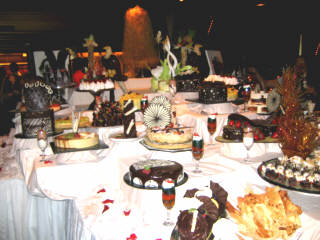