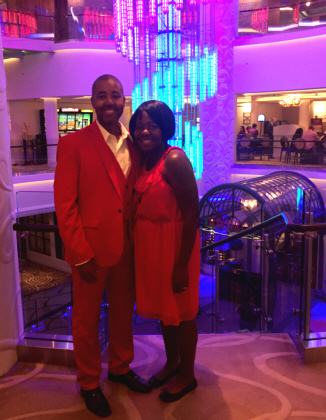 The Capital Jazz SuperCruise 2017 was a lot of fun. Capital Jazz has fixed the problems that turned last year's cruise into a nightmare. This time it was back to how it used to be - great concerts, nice people, a beautiful tropical destination, artist Q&A's and more. I loved the variety of performances that ranged from new artists to legends such as Gladys Knight. There is no such thing as a bad concert on this cruise or a bad party. I recommend that every music lover does this cruise at least once in their life. That said, here is my review of the Capital Jazz SuperCruise...

This was our fourth Capital Jazz cruise. We actually tried to get out of going this time after all the problems with the cruise from the previous year. The cruise sells out quickly so you need to sign up as soon as possible. By the time we went on the 2016 cruise, we had already paid over half the balance for 2017 and that money was non-refundable. Fortunately, the 2017 Capital Jazz Cruise was very nice. We no longer regretted our decision to go.

The 2017 Capital Jazz Cruise left from New York City. Traci and I broke our rule about cruising. We normally plan to arrive in the departure city the day before embarkation to avoid the stress of missing the cruise due to flight delays or cancelled flights. However, this time Traci found such a good deal on our United flight from Washington Dulles to JFK in New York that we decided to fly up the day of embarkation. In fact, it cost us more to park in the economy lot for week at Dulles Airport than did our airline tickets.

Our 7:15 AM flight from Dulles to JFK took just 45 minutes. Capital Jazz provided complimentary shuttles from JFK, La Guardia, and Newark (New Jersey) airports to the cruise terminal. It took about an hour to get to the terminal thanks to traffic. Despite this, by 10:30 AM we were sitting in the departure hall. This was the earliest we have ever arrived for a cruise. The crew had not finished turning over the ship from the last cruise. After a short wait, we were finally invited to begin the boarding process. By 11:30 AM, we were aboard. 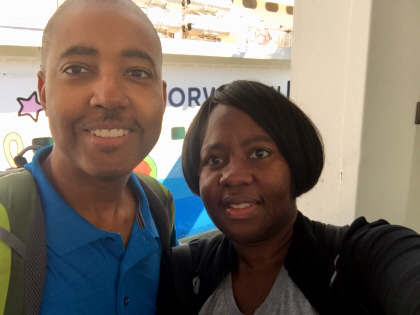 ready to board the Norwegian Breakaway

Once aboard, we saw some familiar faces from previous Capital Jazz cruises but not as many as we usually see. I did meet a Mike's Trip Reports reader (Shout-out to Kim from Richmond). Everyone we met on the cruise was friendly. Those of us who endured the 2016 disaster were cautiously optimistic that Capital Jazz had ironed out all the issues from the 2016 cruise.

We sailed on the Norwegian Breakaway. It has a passenger capacity of 3,963. The ship is almost identical to the Norwegian Getaway on which we sailed the previous year. Therefore, we pretty much knew our way around. We even remembered the fish designs in the carpet that help you determine which direction to walk to get to the front of the ship. We had a mid-ship cabin (9812) with a balcony. It was a nice cabin but the closet was in an odd location. It was right next to the bed leaving little room to access your clothes.

For some reason (maybe exhaustion - more about that later), it took Traci a couple of days to remember our cabin number this year. Because I normally take the stairs and she takes the elevator, I ended up waiting for her to return to the cabin for more than 15 minutes one time not knowing that she forgotten our cabin number. I thought she had stopped off at the buffet to refill her water bottle with ice. She eventually had to look up our confirmation email on her phone to find our room number.

Despite our normal excitement at the start of a cruise, this was the most low-energy start to a vacation for Traci and me. Traci had spent the previous two days with her team of women running Ragnar DC, a 200-mile relay run from Cumberland, MD to Washington, DC. She arrived home the night before the cruise around 11 PM and then still needed to pack. Packing for Traci is a major event in decision-making as she sits in the middle of our bedroom floor packing her suitcase, changing her mind, and packing again. She only got about an hour of sleep before we had to be up and out for our early morning flight. Naturally, by the time we were aboard the ship, all she wanted to do was to take a nap. I did too after waking up at 4:30 AM. Therefore, after getting lunch from the buffet, Traci and I went back to the cabin to nap until it was time for the mandatory safety drill. I guess we were supposed to check-in at the safety drill because despite having attended it, we got a note in our cabin indicating we did not attend. We were told we needed to go to the make-up drill. We ignored the letter. 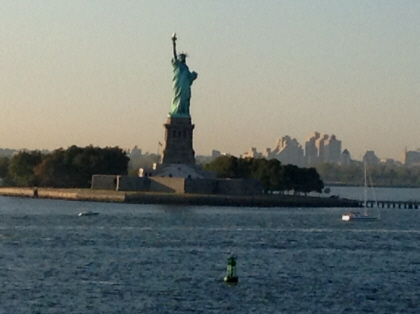 cruising past the Statue of Liberty

By 5:30 PM, our cruise was underway. We sailed out of the New York Harbor past the iconic Manhattan skyline, the Statue of Liberty, and under the Verrazano Bridge. I stood on our balcony on this very hot and humid day snapping pictures while Traci napped. She was so wiped out. As for me, my nap had done me good. I was ready for the late night performances and parties that make the Capital Jazz Cruise such an amazing experience. Continue...