Preparing For Our African Adventure 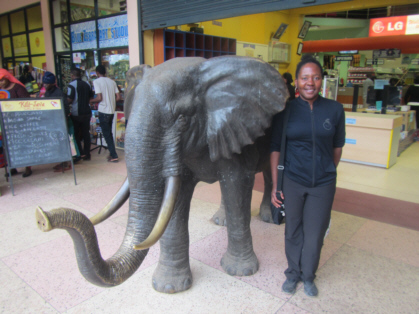 Now that the Mt. Kilimanjaro climb was behind us, it was time to prepare for the reason this trip was organized ľ the Marie Frances Mt. Kilimanjaro Marathon. A tour of the marathon course was arranged for our group. Even though I am not a runner, I told Traci that I would do the course tour for her. Traci and several others in our group who had climbed Mt. Kilimanjaro had arranged a deep-tissue massage through Evans Tours. The masseuse was scheduled to arrive at our room at 7 AM (arrived at 7:45) for Traciĺs massage which would conflict with the marathon course tour.

While Traci was getting her massage, I was on the shuttle with about 20 runners from our group for the ride-through. The run would start at the nearby Moshi Country Club and make its way through the suburban streets of Moshi. The course was a hilly circuit loop that offered runners their choice of doing 10k (1 time around), half-marathon (2 times around), or the full marathon (4 times around). While we were out, we also made a stop at Marie Frances Boulevard. This street was named in honor of our trip organizer, Marie Frances. She lives in the U.S. and has been organizing the Mt. Kilimanjaro Marathon for 25 years. Sadly, Marie Frances was very ill this year and was not able to attend her event. We all posed around her street sign for a photo that we would later send to her.

The shuttle stopped back by our hotel after the course tour to pick up others who wanted to see downtown Moshi and have a pizza lunch. Traci was finished with her massage by then and came to join us. She said her deep tissue massage was painful but was what she needed to help alleviate some of her stiffness.

It was a short ride from our hotel to downtown Moshi. The city has a rural feel but busy. There are no skyscrapers. Some streets were paved. Others were not. Small shops line the busy streets. There are motorcycles everywhere. It was market day so vendors had their produce and merchandise in makeshift stalls and on the ground. Mixed in with this bustling scene was a small parade that traveled down the same street as the busy traffic. 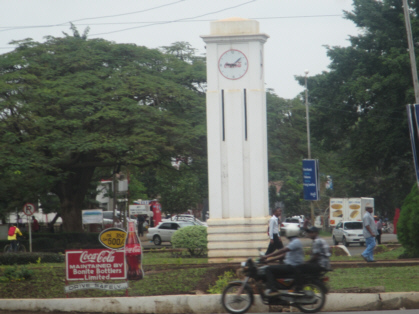 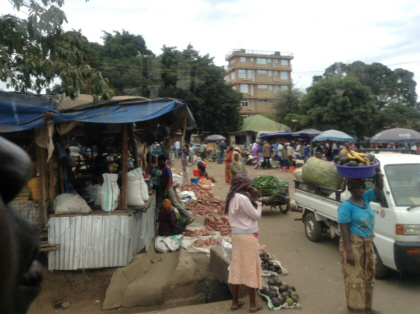 We were given about an hour to walk around downtown. We were cautioned not to take pictures of anyone because they might demand that you pay them. I realized that if we had applied the same rule in reverse, we might have made a few Tanzanian shillings that day. As Americans, we looked different enough through our clothing and hair from the general population in Moshi that the locals were taking pictures of us on the sly with their phones. I'm guessing they were probably more interested in photographing the woman in our group who was wearing shorts. It wasn't like they were short shorts or anything revealing. It is just that from what I noticed when walking around the town is that I never saw Tanzanian women wearing shorts.

We stopped at a bank so that some members in our group could use the ATM. The bank was guarded by men and women with powerful machine guns. We continued walking the streets just taking in the scene. All the shops served practical purposes. It was not until we got closer to pizzeria where we would have lunch that we began to see shops that catered to tourists. These shops sold mainly wood carvings, jewelry, and t-shirts. There were also some vendors along the sidewalk that were using their creativity to make sandals and belts from tires. Traci and I bought our usual souvenir refrigerator magnet from one of the tourist shops.

I was surprised to see a familiar face as we walked the streets. It was one of the aggressive street vendors who was trying to sell us souvenirs through our shuttle windows a week ago while we were waiting to leave Moshi to begin our Mt. Kilimanjaro climb. He greeted me with a "Hey, Brother. Do you remember me?" We both laughed as I did recall seeing him a week ago. He was not selling anything this day. He followed our group and chatted with us as we browsed the souvenir shops. He did ask us for money before he parted.

The pizza we had at the Indoitaliano Restaurant was the best meal I had during our 2.5 weeks in Africa. They served individual 12" pizzas which ordinarily would have been enough for Traci and me to share. However, with our bodies still recovering from the exertion of the mountain climb, we each devoured our own pizza.

We were taken back to our hotel in the early afternoon. There was a 2 PM excursion available but Traci and I, along with others who had climbed Mt. Kilimanjaro, declined when we heard the excursion was to Kilimanjaro National Park. Even though it would only be a sightseeing excursion that involved no climbing, we were in no hurry to return to the park. In hindsight, I wish we would have listened beyond the mention of Mt. Kilimanjaro because those who did the tour said it was very nice. In addition to the park, they visited a local village for a cultural experience.

Instead of going on the tour, Traci and I relaxed at the hotel and checked email for the first time since leaving the U.S. over a week ago. The hotel was preparing the grounds for a wedding reception under a large white tent. I enjoyed listening to some of the music while the workers were setting up on the lawn. This was interrupted occasionally by someone doing a sound check of "Hallelujah" (pause) "Hallelujah". We were able to watch some of the wedding reception from our balcony. It was a spectacular event. A small marching band arrived first followed by the wedding party in a decorated car. Everyone was dressed in colorful clothing. I loved the way that the guests and wedding party entered the reception tent. They swayed, dipped, and strutted to the music.

As for our tour group, the main event for the day was the pasta dinner. Runners have a ritual of carb-loading the night before a race. This was probably the most elaborate pasta dinner I have ever attended. The dining hall was decorated with tablecloths and candles. There was a live clarinet ensemble playing classical music. We all stood while they played the Tanzanian National Anthem and the U.S. National Anthem. There was a head table from which a representative of the Tanzanian Prime Minister's office welcomed us. Three Maasai men did a short performance that included chanting, yelling, and bobbing but not a lot of the jumping for which they are known. We witnessed an outstanding performance by an African acrobat troop. They did some really impressive and dangerous routines. Finally, we celebrated all our group members who have June birthdays. Each of them received a birthday cake. It was a fun evening. 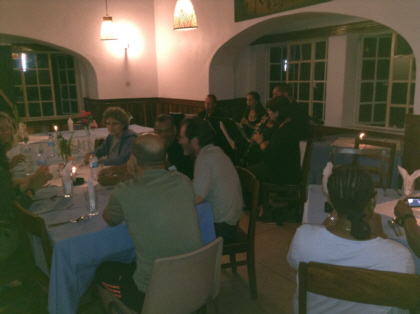 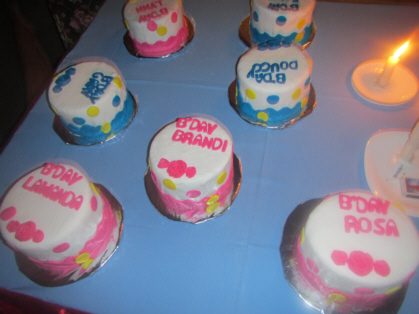 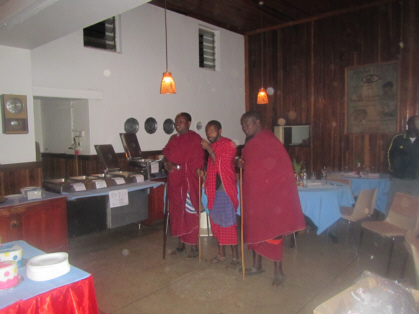 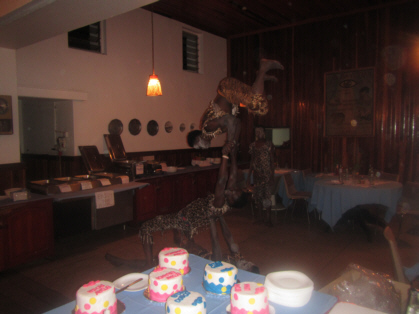 Sunday morning was race day. We were shuttled to the start line at the Moshi Country Club. There were 23 runners in our group and about the same amount of Tanzanian runners. Since I was the only non-runner, several people in our group gave me their camera or tablet so that I could photograph them on the course. It was going to be a challenge for me to make sure I photographed them with the correct camera. I had so many cameras with me that some of the spectators asked which magazine or newspaper I was with. 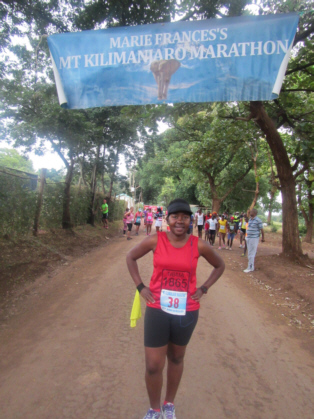 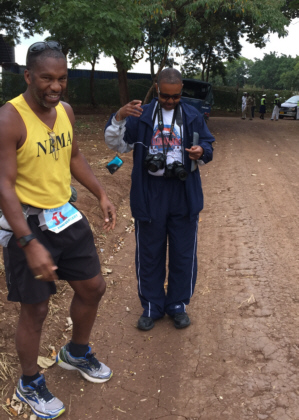 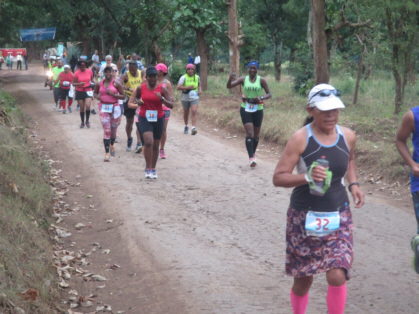 The race began at 8 AM sharp. A police vehicle with a very loud siren led the way. None of the streets were closed to vehicle traffic at the time of the race but because it was early morning, there was not a lot of traffic. There was no electronic time keeping or chip sensors. Instead, there was a man sitting at a table under a tree recording the times of the runners with pencil and paper. The Tanzanian runners were much faster than anyone in our tour group. In fact, they lapped most of the group at least once if not more. I hung out on the course for about two and a half hours taking pictures of our travel companions. I spent time chatting with a young seminary student who was manning one of the water stops. He could speak English fairly well. We had good conversations. He was interested in knowing about life in America. Likewise, I was interested in knowing about life in Tanzania.

Traci completed the half-marathon (13.1 miles). I was totally amazed by her and others who had the energy to complete a distance run after climbing Mt. Kilimanjaro. Traci and I walked back to the hotel so that she could shower and change. We then walked back to the Moshi Country Club for a nice lunch of fried chicken and French fries. An award ceremony for the Tanzanian runners followed in which they received money and sporting goods. There was a separate award ceremony for the non-Tanzanian runners at which trophies and medals were distributed. Traci earned 5th place in the women's half-marathon. Yeah, Traci!

Later that evening, our friend Tony uploaded to his laptop the pictures I had taken of the runners and displayed the slide show during dinner at the hotel. The rest of the evening was relatively quiet. Continue to Safari...

Preparing For Our African Adventure 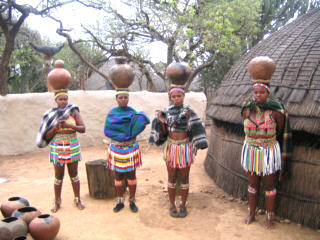 Entire fridge magnet collection...
[Back to the Main Page]