Retreating to the Burbs 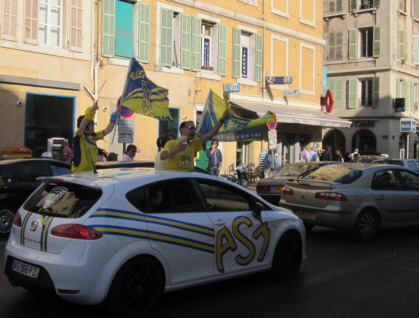 rugby fans juiced up for an upcoming match

When booking this trip, we were not able to find a hotel in the tourist district that had weekend vacancy; therefore, we had to spend our last two nights at an airport hotel in the suburbs. We checked out of the Best Western La Joliette hotel downtown and got in our last full day of sightseeing in the city. The hotel secured our luggage while we did this. We tried not to stay in the city too late that evening. People had been literally getting juiced up all day in preparation to root for their favorite team in a rugby match. The bars were overflowing with fans wearing their team’s colors. Groups of people waved flags while they chanted and occasionally broke out in song. Cars rode through the crowded streets honking their horns. It was a jubilant time. There was an increased police presence at metro stops and other areas of the city to make sure things did not get too out of hand.

Traci and I collected our luggage from the hotel and took the metro to St. Charles Station where we caught the shuttle to the airport. We had booked two nights at the Best Western Aeroport Hotel. Our arrival at this hotel did not go as smoothly as we had hoped. This Best Western Aeroport has courtesy phones located in the airport for passengers to call for the hotel’s complimentary shuttle. We called several times but got no answer. I could see the hotel from the airport and it did not look too far away; therefore, we walked. There was actually a pedestrian path that led through the car rental lot and across the street to the Best Western. It took us about 10 minutes to make this trip with our luggage. We told the man at the front desk about no one answering the courtesy phone and he insisted it never rung.

We checked into our room and were about to unpack when I noticed we had been given a smoking room. I knew Traci had requested a non-smoking room since cigarette smoke wreaks havoc on her allergies. Guests in other rooms on the wing were smoking and we were starting to smell it. We called the front desk and were told they could not change our room because the hotel was fully booked. A man with a can of Febreeze was sent to our room. Traci went online to verify she had indeed requested a non-smoking room at the time of booking. We then went to the front desk to protest. The two men working the front desk gave us all types of excuses of why there was nothing they could do – everything from the hotel is full to blaming us for not specifying non-smoking when we checked in. Traci showed them our reservation and it not only indicated non-smoking but it specified “strictly non-smoking”. One of the men looked in the hotel computer and then gave us a key to a non-smoking room. Hallelujah! The men apologized to us several times as they helped us move.

It was about 11:30 PM by the time we got settled into the new room and we were exhausted. The room was a typical chain hotel room and it was much bigger than the one we had at the Best Western La Joliette downtown. The bed was really comfortable. In fact, it was so comfortable that we slept two hours longer than we had planned. We got off to a late start on our sightseeing plans the next day.

Popes Across the Bridge

For our last full day in France, we decided to do a daytrip to the town of Avignon. To get there we needed to take the airport shuttle downtown to St. Charles Station and then take a train to Avignon. We bought roundtrip tickets for the regional TER train.

Central Avignon consists of a quaint village with narrow streets, shops, restaurants, and small hotels. Traci had already been to Avignon earlier that week when her boss took her team out for dinner but they did not get to see much. One of the major draws of the town is the Popes' Palace (Palais des Papes). Before the Vatican became the home of popes, this large impressive medieval fortress in Avignon was the home of popes from the 1300’s to the 1600’s. Traci and I spent 1.5 hours doing an audio tour of the palace. Most of the rooms are empty. The audio wand commentary told about what used to take place in the rooms: receptions, accounting, meditation, dining, etc.. We learned about the business of running the Catholic Church and Europe in those days. Back then, the pope was more powerful than rulers of nations. 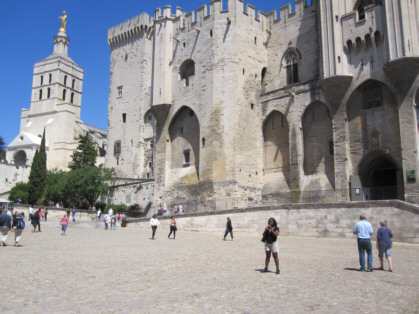 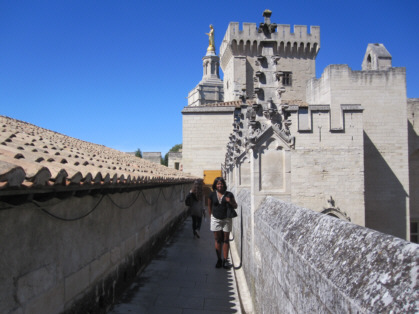 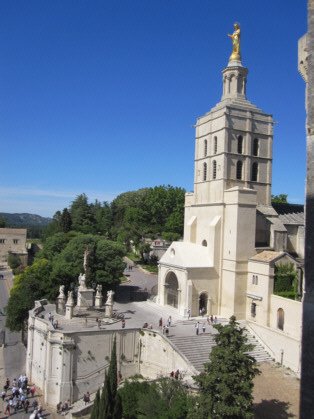 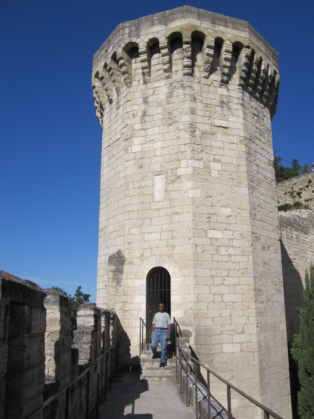 on the city ramparts

The other major draw in Avignon is the Bridge of Avignon (Pont d’Avignon) - also known as the Saint Benezet Bridge. Built in the 12th century, the bridge is probably best known for the nursery rhyme that was written about it. Our admission ticket package for the Popes' Palace also included an audio tour of this famous bridge. I was a little surprised there was an audio tour. I was under the impression we’d walk on the bridge and maybe snap a few pictures to say we were there. The audio tour tells about the bridge’s legendary beginning, its history, the bell tower, the chapels below, and its destruction. There were originally 22 arches of the bridge spanning the Rhone River but today only a fraction remain. The bridge stops abruptly about half way across the river. 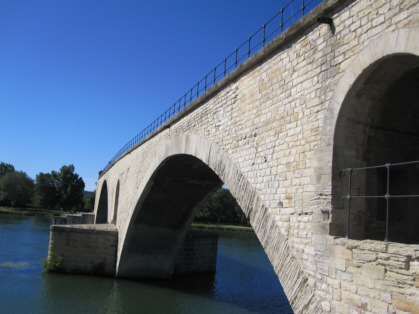 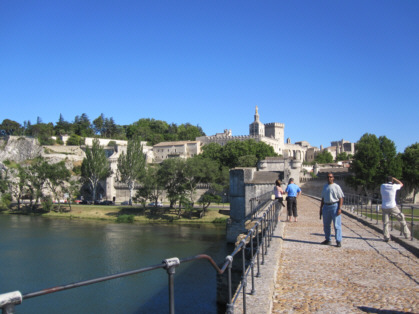 on the Bridge of Avignon

Traci and I finished off our lovely day in Avignon with a seafood dinner at one of the city’s quaint restaurants and then walked to the train station for our trip back to Marseille. This time, we were on an ICTER train. I thought maybe this was a step below the TER that brought us to Avignon. The seats were not as nice and there was no fancy marquee indicating the upcoming station stops. Boy was I wrong! This ICTER train crept out of the station and then took off like lightning. We rocketed along the tracks with the only sound being the occasional quick swish as we passed structures situated near the tracks. This ICTER train completed the trip back to Marseille in only an hour, whereas it had taken us two hours to get to Avignon from Marseille on the TER. What was even more fascinating to me was that the ICTER is not even France’s high speed line (the TGV). The TGV makes the trip between in Marseille and Avignon in about 30 minutes!

Sunday morning, it was time for the long trip home. We had a 2-hour flight from Marseille to Frankfurt, Germany. Unknown to us at the time, Germany was in the world headlines because they were searching for the source of a new strain of E. coli that had killed several people in the northern part of the country. It was determined two weeks later that the culprit was sprouts.

We had a 5-hour layover in Frankfurt before making the 8.5-hour flight across the Atlantic to Washington Dulles Airport. We had never been to Germany and would have loved to have done some sightseeing but our layover was not quite long enough. Instead, we passed the time by eating at one of the restaurants inside the airport. I got a taste of Germany by having a plate of wursts and fries. The food was great - especially the desserts. 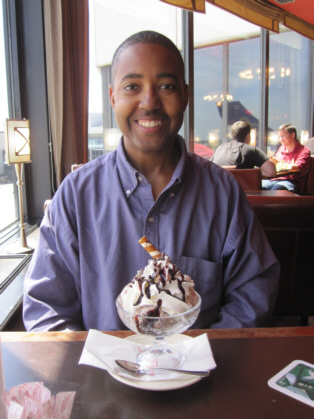 The flight home was peaceful. I spent part of the time reflecting on our adventures in France. Marseille and Avignon are two places I am happy to have had the opportunity to visit. Main Page...