Thursday was our last full day of sightseeing. That morning gave us the rare opportunity to sleep in. We did not need to be at our first attraction until 1 PM.

It was a 1.5-hour drive to Ripon, Wisconsin. We were there to see Larson's Famous Clydesdale horses. When I hear the word, Clydesdale, I normally have visions of Budweiser Christmas commercials in which a team of these shaggy-hoofed horses are pulling a Budweiser sleigh through the snow. I guess I thought I was going to see something similar during our visit.

The brochure for the Larson's Famous Clydesdale attraction advertises a daily 1 PM tour and show. Reservations were recommended so I called and made ours the week before our trip. We arrived at the Larson's house about 12:40. There were two other cars parked on the shoulder of the country road. About 5 minutes later, Judy Larson, opened the gate and let us park in her driveway. As she was collecting our admission ($15/person), she told us they normally have 125 people per day at their tours. There were only eight of us that day. I was scratching my head trying to figure out where 125 people would park. There was only room for three cars parked single-file in her driveway and no parking lot that I saw.

Judy began her tour by bringing us to the fence behind which her prize show horses were standing. One of these gigantic horses is named Reggie White after the late NFL player who played for the Philadelphia Eagles and later for the Green Bay Packers. As Judy told us about the effort it takes to transport her horses, prepare for shows, and provide day-to-day care, it was abundantly clear how proud she is of her horses and her family who compete them. In fact, she is so proud that she gave each of us an ultrasound picture of their newest foal when it was still in the womb.

We were shown the trailers used to transport the horses, the wagons they pull, their reigns, etc.. We were taken to a shed full of ribbons, trophies, and pictures from competitions the Larson Clydesdales have won.

Then we met Big Bud. This horse is so tall it could barely get its head under the doorway of the barn. We were given the opportunity to have our pictures taken standing next to Bud. We were then taken into the barn to see and pet the newest foal. At 2-months of age, this horse was already as tall as I am! Yes, Clydesdales are huge. 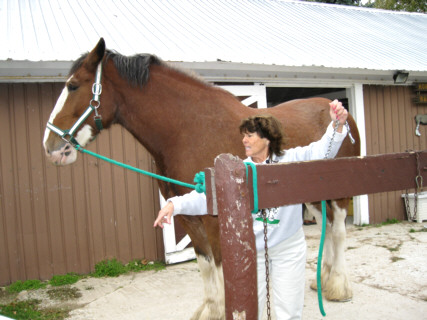 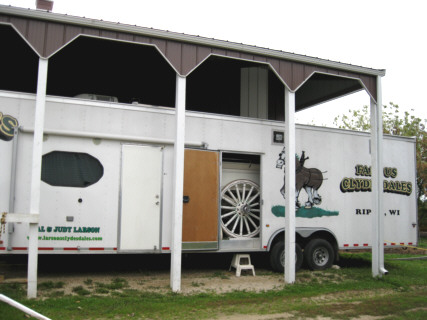 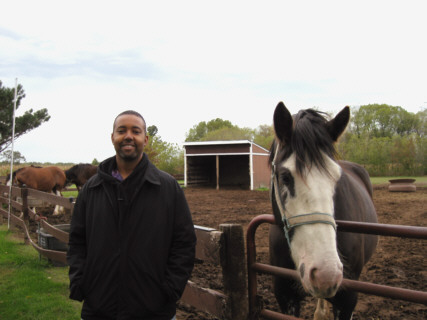 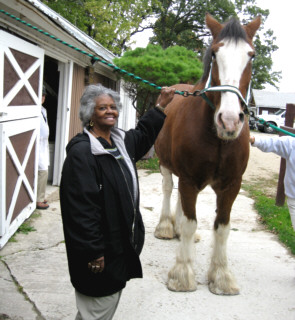 Mom overcame her fear of horses.

Before I knew it, we were being led to a shed where we could buy souvenirs if desired. Traci bought a running shirt and some postcards.

We were not sure what to make of this visit. I was thinking maybe we'd see the Clydesdales hitched up and pulling a wagon like the Budweiser commercial. We never did see the advertised show. It was a cold, windy day and I think I heard Judy mention it was too cold to have us sit in the stands. In the end, this attraction was just not our cup of tea. I think I had more fun watching the guy in our group who was blown away by every fact he heard and by every horse he saw. He seemed like a real horse lover who truly enjoyed the tour.

On our drive to our next attraction, I learned about a monumental victory that had taken place that day that we had no idea was even happening. My mother told us that she has been afraid of horses all her life! Yet, despite this fear she actually petted Big Bud who towered over all of us. Way to go, Mom!

We left the Larson's Famous Clydesdale attraction in barely enough time to make the 2-hour drive to our next attraction - the Wollersheim Winery. Tours are given every hour starting at 10:15 AM with the last of these occurring at 4:15 PM.

We began by watching a short film on the history of the winery. It was started by Count Agoston Haraszthy of Hungary in the 1840's. He soon abandoned the winery and moved to the more favorable climate in California where he founded the state's wine industry. The Wollersheim family bought the abandoned Wisconsin winery in 1972. Philippe Coquard, a French winemaker, married into the family and passed on his knowledge of winemaking.

The rain had stopped long enough for our guide to take us outside to see the vineyards on the hillside. We were then led inside to the fermentation room where we watched a film on how the machines before us are used. There were charts on the wall that showed the temperature and duration of fermentation needed to produce the various wine flavors. 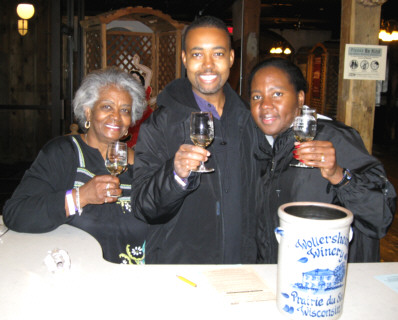 Next, our guide took us downstairs to the cellar where the aging of the red wines takes place in oak barrels. The white wines are not aged in barrels. They only go through the fermentation process.

Finally, we were led upstairs to the wine tasting room. My mother, Traci, and I generally do not drink alcohol but decided to partake in the tasting anyway. We were given a list of the wines we'd be tasting, some oyster crackers to cleanse our palates between tastings, and water to rinse the glasses between tastings. Our guide gave us instructions on how to inspect the wine by sight, by smell, and finally by taste. He recommended we rate each wine we tasted on the list he gave us so that we could remember the names of the ones we liked just in case we decide to buy a bottle. 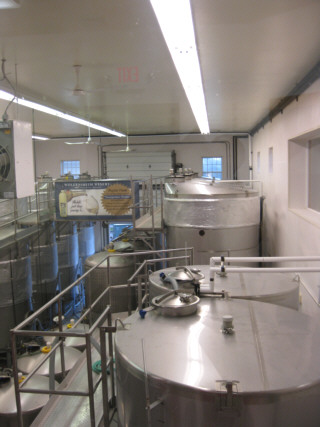 Grapes are fermented in this room. 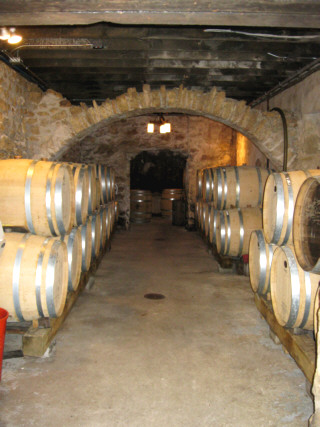 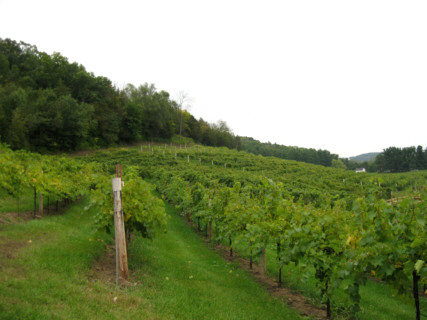 The grapes are grown on this hillside. 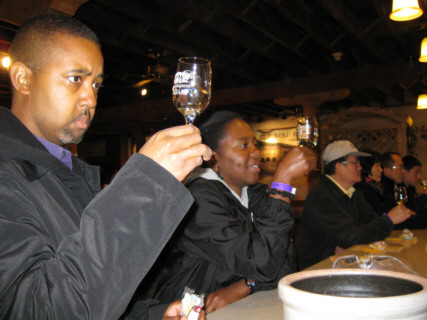 We tasted the five beverages (four wines and one non-alcoholic champagne) the winery recommends and then we could request any of the remaining eight wines listed. My mother and I tried two or three more beyond the five while Traci, being the thorough person she is, tasted all of them. I never knew there were so many variations of the beverage. We had a nice time. The funny thing about our visit is that my mother and I seemed to rave about the oyster crackers more than anything else that day.

The tour and tasting lasted about 45 minutes. The winery was closing by the time we finished. We headed out into the pouring rain and drove back to the Dells. We made a stop at the outlet mall on the way. My mother and Traci had a successful shopping trip there. 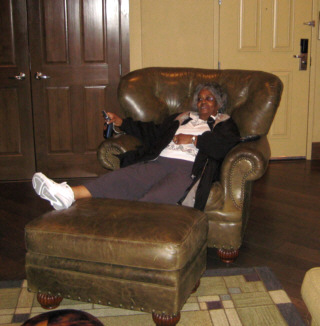 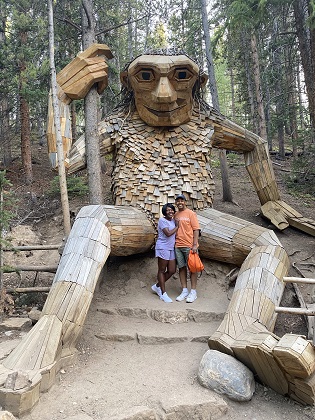 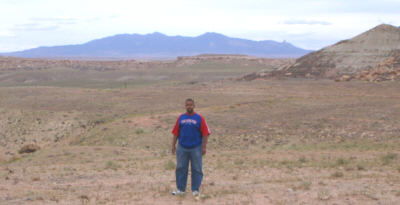 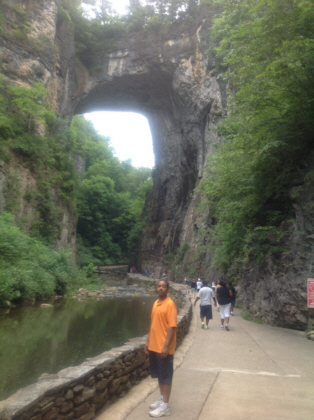 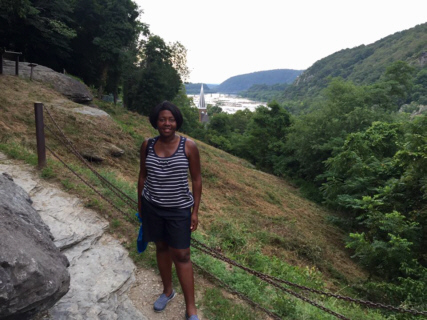 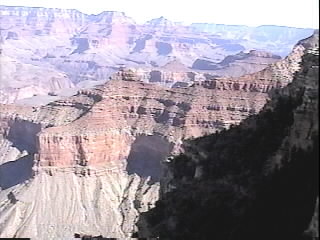 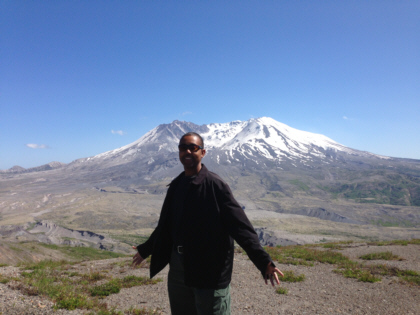