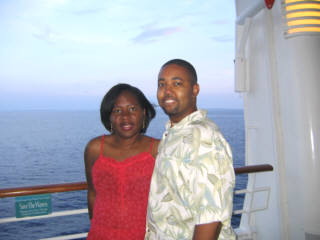 Our trip did not start off too good this year. We had planned to fly to Miami on Friday evening to attend the official Fantastic Voyage Bon Voyage party in downtown Miami and then board the ship the next day. We ended up missing our flight out of Phildelphia because we got caught in a 9-mile traffic jam. My heart sank when the lady at the USAir counter told us there were no more flights from Philadelphia to Miami that evening. Instead, she booked us on the first flight to Miami leaving the next morning. She was nice enough to print our boarding passes the night before to guarantee us seats on the oversold flight.

We ended up spending Friday night at the Philadelphia Airport Marriott. I did not want to take a chance on missing our Saturday morning flight. The cruise ship was scheduled to depart Miami at 5 PM - with or without us. Our stay at the hotel was free, thanks to the Marriott points Traci had accumulated through business travel.

It felt great to be onboard the Royal Caribbean Navigator Of The Seas for our second Fantastic Voyage. This year, each person received a copy of Tavis Smiley's latest book, The Covenant With Black America, when boarding. The book had just made #1 on the New York Times best seller list. Way to go, Tavis!

There was a bottle of champagne and cookies waiting for us as we entered our inside cabin that overlooked the Promenade Deck. After dropping off our carry-on bags, we headed to the Windjammer Cafe for a quick bite to eat and then made our way to the Pool Deck for the Sailaway pool party. The atmosphere was quite festive. There were people line dancing. Others were kicking back with a drink. Wearing my Hampton University T-shirt for Represent Night, I found myself greeting other Hampton alumni. Traci was throwing up the Delta sign and doing the Delta call as she encountered countless sorors. It was a really good time. Most of the people we met had done the Tom Joyner cruise before. There were a few that had been coming every year since the first one.

Of course this wouldn't be a Tom Joyner cruise without celebrity sightings. Fred Hammond chilling on the pool deck, J. Anthony Brown humming as he strolls the Promenade Deck, Stephen "Cat" Coore of the Third World conversing with his sound crew, Ms. Dupre waiting for the elevator, Tom Joyner and his wife Donna Richardson greeting fans in the lobby - all these sightings within the first hour of boarding the ship. Tom seemed to be loving every minute of being with his fans. He greeted Traci with a big hug and then posed for a picture. The joy of being on the ship had eclipsed our rough start to this vacation. 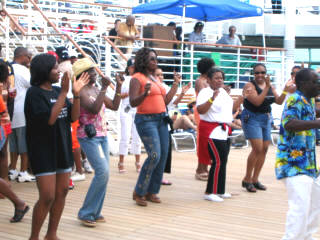 The concerts are my favorite part of this cruise. These took place during the evenings at venues all over the ship. Although, we were on a different ship than last year the lounges and auditoriums were in the same locations but sometimes with different names. The Metropolis auditorium has somewhere between 1500 and 2000 seats. The concerts in here started at 9 PM each night and lasted for 3 to 4 hours.

The Studio B auditorium is ordinarily an ice skating rink with several hundred seats surrounding it. However, on the Tom Joyner cruise, the rink is converted to a dance floor and a stage is added to one end. Concerts began at 2 AM in here and ended around 3:30 AM. Like the Metropolis auditorium, Studio B has high tech computerized light effects and an advanced sound system.

There were other venues on the ship such as the lobby, the Schooner Bar, and the pool deck. In the evenings, there seems to be live music all over the ship. All of the acts are top quality. Tom Joyner and his staff definitely have a knack for finding talented musicians.

The entertainers are evidently treated very well on this cruise. We heard many of them talk about how much fun they were having. Some would ask Tom during their concerts if he would have them back next year. Bobby Brown said, "I'm being a good boy." after telling the audience he wants to come back next year.

Regardless of the venue, each musical act performed at least two nights. This was good because it increased the chances of everyone having an opportunity to see them. Traci and I paced ourselves and did not attempt to see every show this year, but we came pretty darn close. Here is a list of the concerts we saw on the cruise this year:

The King Of R&B

His wife, Whitney Houston, calls him The King Of R&B. I'm talking about none other than, Bobby Brown, a former member of the group New Edition turned solo artist. Without a doubt, there was no other entertainer that created more buzz on this cruise than he. Over the years, the tabloids have had a field day reporting his run-ins with the law, his rumored maritial problems, and other mishaps. Add to this the success of his reality show, Being Bobby Brown and you've now got the most anticipated concert on the cruise. Bobby Brown has had a reputation as a 'bad boy' who has also occasionally been a no-show at various events.

Bobby Brown was scheduled to perform in the Studio B auditorium on Monday night and Tuesday night from 2 AM to 3:30 AM. It was the topic of many conversations on the ship. People wanted to know things like 'Will he show up?', 'It's been a while since he's had a hit. Can he still sing?', etc. The comedians on the ship had a great time poking fun at him as well. By the time we had docked in Nassau, Bahamas, J. Anthony Brown said, 'I've just received my latest Bobby Brown report. Bobby has cleared customs and is now on the ship.'

All during the day, you could feel the anticipation of this concert. By midnight, the line for this 2 AM concert had already expanded to two decks. Traci and I decided to take advantage of this time to see Michael Ward perform smooth jazz in the small Viking Crown Lounge at 1 AM and then try our luck at getting into the Bobby Brown Concert in Studio B. We made it to Studio B about 2:20 AM and it was standing room only. Even some of the Royal Caribbean staff had come to see the performance. There were so many people, Traci and I could not even see the stage. We had to look at the TV monitors to see what was going on. We eventually inched our way to the top of the steps where we could see the stage. Bobby sounded great and his band was tight. He is an outstanding performer. He gyrated, stood on the speakers, took off his shirt, and totally drew the crowd in. Even when his voice started to wear out near the end of the show, he still went for the high notes. Sometimes he hit them and other times he did not. It didn't matter. People were more interested in what he was going to do next.

I came back to the next night to see the concert since I had missed the beginning. I ended up staying for the whole thing. I was glad I did. It turned into a jam session that included Bobby and Babyface (wrote many of Bobby Brown's hit songs) singing together. Rapper, Doug E. Fresh also joined Bobby on stage and the two of them took turns beat boxing. The Bobby Brown performances had lived up to all the hype.

Get Your Praise On

I'll admit I had second thoughts about attending a Sunday morning worship service scheduled from 9 AM to 1 PM! This event took place in the Studio B auditorium of the ship. I could tell we were in for a treat when we entered. Even though people had options such as sleeping in or going ashore to enjoy Freeport, Bahamas (our first port of call), the auditorium was jam-packed. Tom Joyner had announced that he received complaints because he didn't have the worship service last year. The ship left from Puerto Rico on Sunday evening last year so it would have been impracticle to hold the event. But with the ship leaving Saturday evening this year, the Sunday morning service had been resurrected.

The program was hosted by Dr. Bobby Jones of Bobby Jones Gospel. He is a fun, witty host. Bishop Eddie Long delivered a great half hour sermon. And then, it was concert time. Vicky Winans started it off with a few songs and then Fred Hammond and his band totally lit the place up. The end of Fred Hammond's set had turned into an all out jam session that included Dr. Bobby Jones, Vicky Winans, and Shirley Murdock. J. Anthony Brown, who can really sing, had even joined in. However, always true to his comic roots, J. Anthony Brown managed to turn the gospel song into a jingle advertising his clothing line. Nonetheless, the concert was awesome. Now I understand why the event is so well-attended and why people complained when it was not held last year. Most of the people we met on the ship the rest of that day talked about the service. continue...