Friday was an early morning and a full day for us. I was up by 6 AM. I walked to the McDonald's down the street to pick up breakfast for Traci and me and then hurried back to our hotel for our 7:20 pick-up by the Tropic Wings tour company to do their Classic Kuranda Experience excursion. This was my favorite day during our time in Cairns.

We were driven to the Freshwater Railway Station where we boarded a train for a 1.5-hour trip into the mountains on the Kuranda Scenic Railway. It is a narrow gauge railway that opened in 1891 after being constructed by the manual labor of more than 1,500 workers. As we climbed higher into the mountains, we got amazing views of the valley below. The train stopped about halfway through our journey to let us out for 10 minutes to enjoy the view of Baron Falls in the distance. We could see the waterfall cascading down the side of a mountain. It was raining rather steadily at this point. This was not too much of a surprise because we were in a mountain rainforest. I often saw the mountains that surround Cairns veiled in rain clouds.

A Ride on the Kuranda Scenic Railway 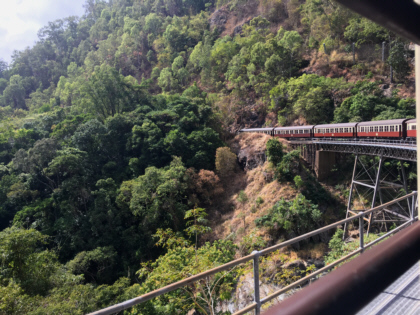 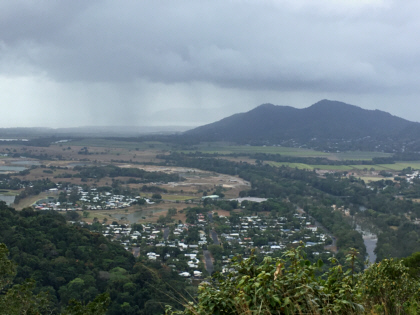 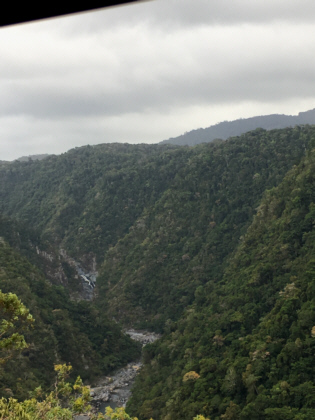 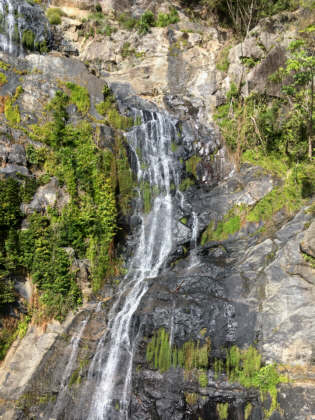 Our train journey ended at Kuranda. From there we boarded a motorcoach which took us to Kuranda Village. There is a flea market as well as other shopping venues there. Traci and I skipped the butterfly farm. We did not want to pay the extra fee to look at insects no matter how pretty their wings are. We spent most of our time in the market. While Traci was searching for Australian cookbooks, I ended up stopping by the booth of a man who was selling locally grown products. He let me taste a variety of macadamia nuts. They had such a fresh taste. Traci eventually joined me in sampling the products. We even tasted kangaroo jerky. It was too hard and dry for me to discern any distinct flavor. In the end, we bought a variety pack of the macadamia nuts.

My taste testing did not stop there. On the way out of the market, I came across a gelato stand. The vendor let me taste the salted caramel flavor (Yum!) and the lemon & basil flavor. I did not detect any basil. It seemed weird to have it in a gelato. However, the gelato was really refreshing - especially now that the warm sunshine was trying to make an appearance.

After strolling through more shops, it was time to get back on the bus so that we could be taken to lunch at Rainforestation Nature Park. It was here that we were immersed into Australian culture that included Aboriginal culture. It began with a very nice lunch buffet. It had familiar items but what I liked about this buffet was that it also had some Australian dishes that I had seen in other Australian restaurants but was hesitant to order as a main dish. Alas, here was my chance to try kangaroo, crocodile, and even Vegemite. The kangaroo was on skewers. It was delicious. It tasted like grilled steak. There was a corn, crocodile, & saltbush (Australian desert plant) soup; however, the bits of crocodile meat in the soup were so small that I could not get a sense for the taste of the meat. As for the Vegemite, I first heard about this in the 80's hit song "Down Under" by the group Men At Work. In that song, they mention a Vegemite sandwich. I was not too keen on tasting anything that begins with the word "vege" since there are very few vegetables I can tolerate. Nonetheless, Traci had a piece of bread containing the spread. She tore off a piece and gave it to me so that we could try it together. Some friendly Aussies seated at our table were waiting with smiles on their faces to see what we thought. They all had a laugh when at the looks of disgust that came to the faces of Traci and me. One of the ladies asked, "A bit salty, is it?". That was an understatement. Yuck! She recommended it with butter if we decide to try Vegemite again - not likely.

Our visit to Rainforestation Nature Park was very organized. After lunch, we were handed an itinerary but we did not need to be too concerned with keeping up with it. Our group was assigned a tour guide who walked us through the various demonstrations that day. We began with the Koala & Wildlife Park where we were handed over to a guide who walked us through the exhibit. It is kind of like a small zoo that features native Australian wildlife such as dingoes, a cassowary (type of large bird), a huge crocodile, and, of course, kangaroos and koalas. The animals were in enclosures; however, the kangaroos and wallabies (think smaller version of a kangaroo) were not. You could actually pet and/or feed the kangaroos and wallabies. Although I am not crazy about seeing caged animals, I thought our guide gave excellent commentary on the animals we saw. 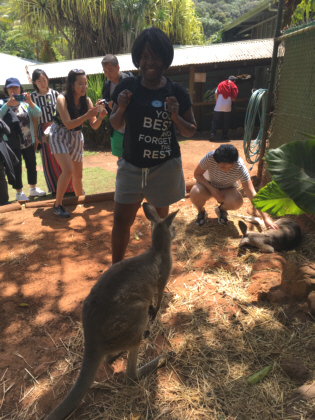 From the wildlife park we were led to observe some Pamagirri Aboriginal demonstrations such as spear throwing, boomerang throwing, and the playing of a didgeridoo (musical instrument). Boomerangs have been used by the Aborigines for thousands of years for hunting animals such as birds and bats. We were given the opportunity to throw a boomerang. It was my first time throwing one. I was amazed to see how far it can be thrown and how much it curves in the air to come back to you (Okay, not quite back to me but it did reverse direction). 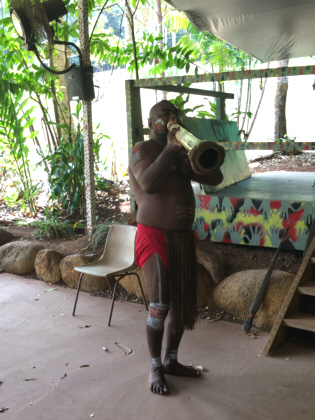 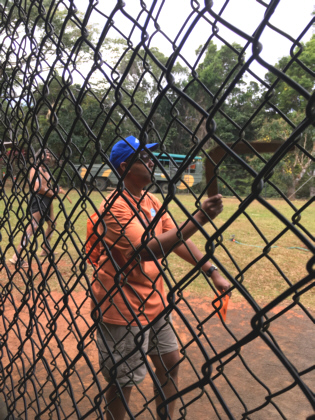 my first time throwing a boomerang 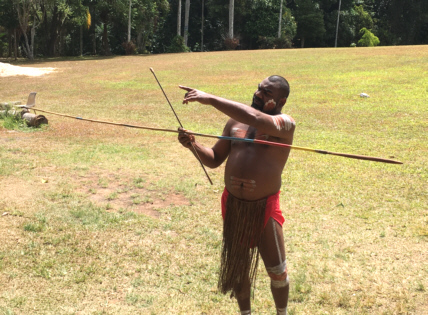 We attended the Pamagirri traditional dance demonstration in the amphitheater. The performers donned body paint and danced to the sounds of the didgeridoo and percussion. It was not the dancing that made this a memorable experience. Instead, it was an incident in which one of the performers accidently sneezed when coming on stage. This caught the other performers off guard and subsequently caused them to try to suppress their laughter during the show. Laughter can be contagious and when it hits you during a moment when you are supposed to be serious, it seems to make it funnier. It was like watching a Saturday Night Live skit in which the actors got a case of the giggles while trying to complete the scene. The performers managed to hold it together enough to make it through the demonstrations. The show ended with audience members being invited on stage to do the Shake-a-Leg dance. Traci participated. 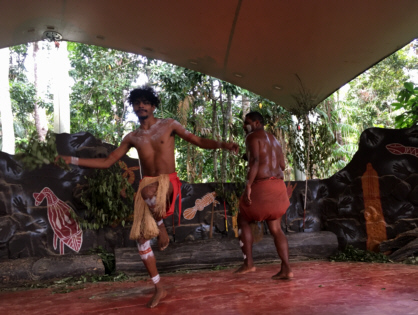 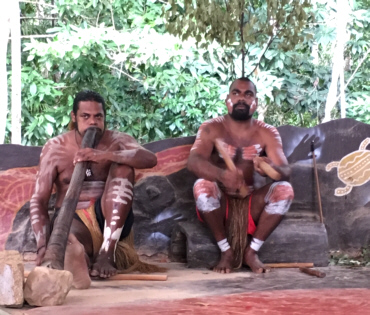 After the show, it was time to get back to nature. We boarded an amphibious vehicle for our ride through the rainforest. I was happy to learn that this rainforest is on the UNESCO World Heritage list. Therefore, I was able to add it along with the Great Barrier Reef and Uluru-Kata Tjuta National Park to my list of world heritage site visits. Our driver gave us all types of facts about the rainforest vegetation. What was most fascinating to me was learning about all the plants that can make you sick or kill you. Our guide warned us about the leaves of the stinging tree that could make your life miserable for up to a year just by brushing against it. Yikes!

When we reached the river, our driver converted the vehicle into boat mode so that we could travel the river. We learned about more plants and trees. We even saw a few lizards.

Rainforest Tour in an Amphibious Vehicle 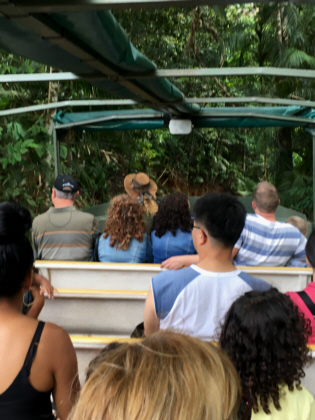 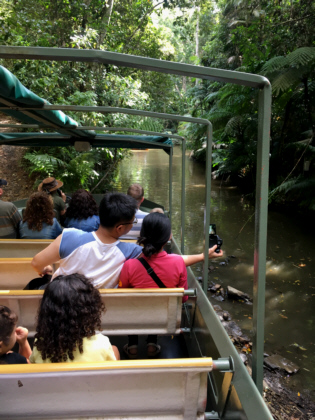 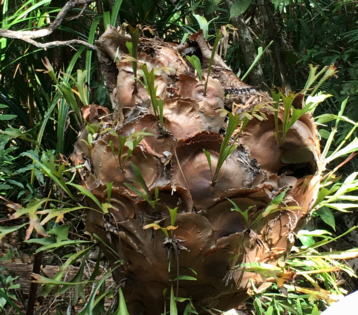 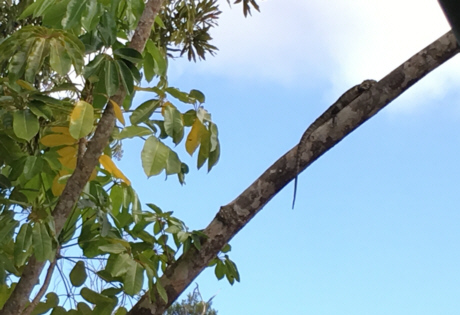 The rainforest tour was very nice but our rainforest experience did not end there. We were taken to the Skyrail station where each family/party boarded a cable car for a sky ride above the forest. This was the best sky ride I have ever done. I was amazed by how silently our car glided above the rainforest canopy. This allowed us to hear some of the birds of the jungle. The Skyrail made stops at three stations along the way. At some of the stations, we did things such as walk through a museum or walk along a boardwalk through the rainforest. The most incredible part of the ride was near the end where the cable car climbed higher into the mountain until we came to the crest. Traci and I both said "Wow!" as the ocean and coastal communities came into view. I could not believe how high in the air we were. It was like looking out of an airplane. We continued to be amazed at the scenery as we slowly descended the cable into the final station. What an experience!

Skyrail Ride Over the Rainforest 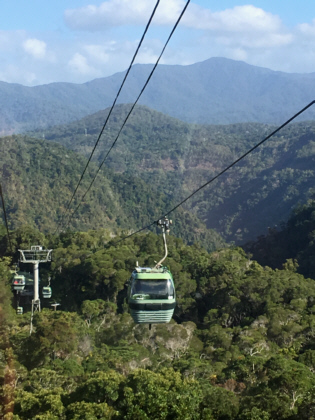 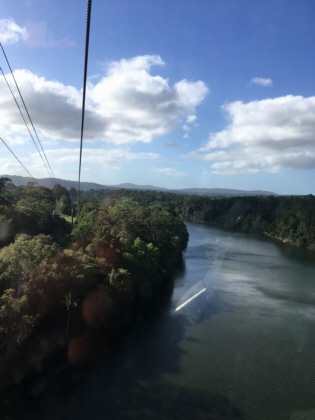 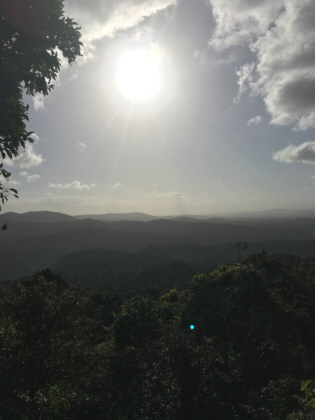 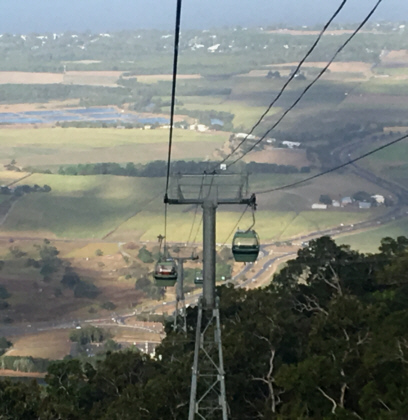 It was already dark by the time Traci and I were dropped off at the Pacific Hotel Cairns after an amazing day at Kuranda. Now it was time for our evening ritual of trying to decide what we want for dinner. Again, with so many choices in the area, selecting a restaurant can be challenging. Just as we did the previous night, Traci and I walked around for more than an hour reading posted menus until we finally decided on Barnacle Bill's seafood restaurant on the Esplanade. It was our favorite meal in Cairns.

Sadly, this was our last evening in Cairns. We began the process of packing up. We were pretty good at it by this point. I took some time to stand on our balcony and look at the illuminated city. As I was standing there, I began to hear the familiar screech of those humongous flying fox bats. I looked up and saw swarms of them flying past our hotel. They just kept coming. Their silhouettes against the nighttime sky reminded me of watching a Halloween cartoon. The bats seemed to be headed to a large tree across the street. They were very noisy.

The next morning, Traci was up early to get one last run in before leaving Cairns. While she did that, I walked around the corner to the IGA grocery store to get some pastries and juice for my breakfast. When Traci returned from her run, she got cleaned up and walked down the Esplanade to enjoy a pancake breakfast at the Oasis on the Esplanade Cafe. We were picked up by a shuttle at 11 AM to be taken to the airport for our 1 PM flight to the grand metropolis of Melbourne. Continue to Melbourne...